Jashi Anyua has been arranged to be married to the leader of her nation, the Great Faresh. To help her escape her engagement, her future husband’s enemies offer her an out; become their spy and they’ll give her a new name and identity somewhere the Faresh will never find her.

But Jashi gets to know the Faresh, she starts to wonder if she put her loyalties in the right place. Even moreso when she realizes that the Faresh shares the abilities she’s had to keep secret her whole life, and he might be the only one that can train her to use them.

Dragons, royalty, and unexpected themes; Conquest was an amazing book!

When I started Conquest late last year, I did expect to enjoy it as much as I did. I mean I did have high hopes for it, but I enjoyed it more than I thought I would.

Conquest follows the story of Jashi Anyua, a ‘regular’ citizen of K’sundi under the Equalisation regime, and Kahmel Omah, the Faresh (king/ruler of K’sundi). In an unlikely turn of events, Jashi ends up engaged and married, in a traditional arranged marriage, to Kahmel becoming the Faresha, even when she doesn’t trust him or his motives.

I initially came into Conquest expecting to be carried with the enemies-to-lovers subplot (yes, it has enemies to lovers!), Black royalty and dragons, which I was, but there was more to Conquest that kept me engaged than that.

Conquest is set in the fictional world of Hemorah, a world just like Earth in more ways than one. Hemorah is a planet with a vast number of races and species, all united by a common Equalisation law.

Now that I come to think of it, Conquest is low-key a dystopian science fantasy (its a cross of science fiction and fantasy, so that’s why I call it a science fantasy), and also very much like our narrative in reality. A common Equalisation law/regime, that should be obeyed without question and any nation that doesn’t follow these laws blindly will be hexed out. Very dystopian.

Another thing about Conquest that stood out to me is the commentary on colonisation. The Zendalaans, the creators and enforcers of Equalisation aren’t native to Hemorah. They’re a race of cyborgs with unknown origins who settled in Hemorah and basically took over, enforcing their will on the indigeneous inhabitants of the planet. Sounds familiar, right?

The events in Conquest show just how much colonisation can affect a people. How it steals away the individuality of people by presenting itself as the one good, ‘peaceful’ factor in the face of their barbaric practices.

I could talk on forever about these subtle and unexpected themes in Conquest, but I’d probably give away the plot. Well give away more than I already have.

Back to the less heavy or thought invoking themes, I loved the worldbuilding in Conquest. We talk about wanting magic in modern or futuristic settings and Conquest delivers. Think about it flying cars and dragons? Sounds cool, right?

I also enjoyed the writing, Celeste weaves the different layers of the plot together almost seamlessly and the writing style is easy to follow.

The only thing I didn’t quite enjoy (it wasn’t bad actually) in the structure of the book was the pacing. The first half of the book started a bit slow in comparison to the second half, but I guess it was to introduce us to the book. The second half was more fast paced and more enjoyable. Its my favourite part of the story, everything unravels and makes sense their and certain characters redeem themselves. I also need to say the last few chapters were wow

I think I’ll start this section with the female main character, Jashi Anyua, because that heading is about her.

To be honest in the first chapters of Conquest, I didn’t like Jashi much. She frustrated me to no end, but I ended up…understanding her, which I found shocking. I also loved the way her character developed in the later parts of of book, it made me feel proud of her.

So I more or less said Jashi is like me, here’s why. Jashi starts off as a naive character, an extremely naive one, who has internalised the teachings of Equalisation. She doesn’t question some of things, acts a little impulsively, and doesn’t quite see what’s in front of her till its too late.

These traits seemed frustrating at first, but as the book progressed and I thought more about it, I understood and identified with it. Jashi had grown up under the Equalisation era, had been taught everything approved by the Equalisation in school and has seen the consequences of Equalisation. When you grow up hearing about how a certain group brought salvation to your people you tend to believe it especially when they’re accompanied with stories of how people like are/were lesser and real life repercussions for opposition; how can you think any different?

This is the kind of psychological grooming neocolonisation perpeuate and as someone from an ex-colony, I understood that.

Bottom line, Jashi became a character I absolutely loved, especially after all the ways she improved.

Jashi, was the only character I loved. I loved the secondary characters, especially her best friend and her Nana, and I loved the male main character, Kahmel.

Kahmel is the embodiment of gruff but soff. I absolutely loved his character, his sense of justice and honour and his drive to do better for his people.

There are so many amazing things about this book. So many things I wish I could say, but I’d end up spoiling. I think everyone needs to read Conquest. Its a 200% recommend from me and I can’t wait for the next book. 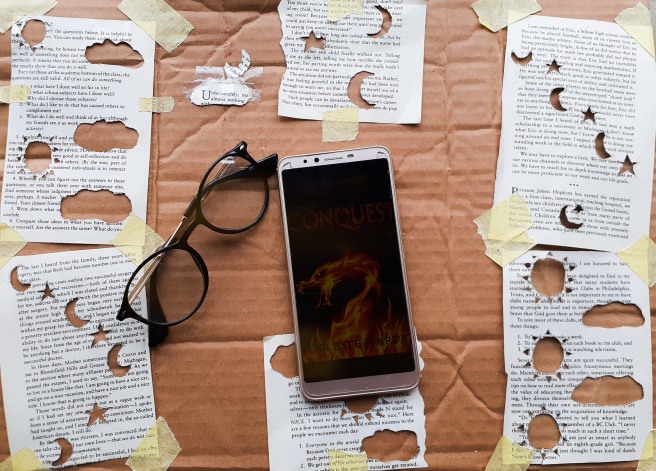 Have you read Conquest yet? If you haven’t, will you be reading it?

Join 3,108 other followers
Follow em in worderland on WordPress.com