Welcome to The Black Experience, a month long blog series through February, in honour of Black History Month, which features Black bloggers, booktubers and authors. This project aims at highlighting Black stories and experiences both in real life and in publishing, as well as showing our individual and collective struggles.

Today for the final post, I’ll be sharing an original book tag, The Òrìṣà (Orisha) Inspired Book Tag. This post was originally a tentative idea, it would or won’t have been published depending on whether I had the time, but here we are. This tag compares some of attributes of the Òrìṣà mentioned to characters who possessed the same characteristics. I hope you enjoy it!

That’s all there is! Now to the prompts

Yemója is the Yoruba divinity of rivers/waters/water resources, motherhood and the Mother Deity.

Blythe Fulton from The Black Veins. I didn’t have to think hard about this one, when I first thought of the tag, the next thing that came to me was Blythe’s name. I guess there more characters that could fit this tag but, Blythe seems like the best choice because she was just a teenager like the rest of the team, but she became their unofficial leader and mother hen. 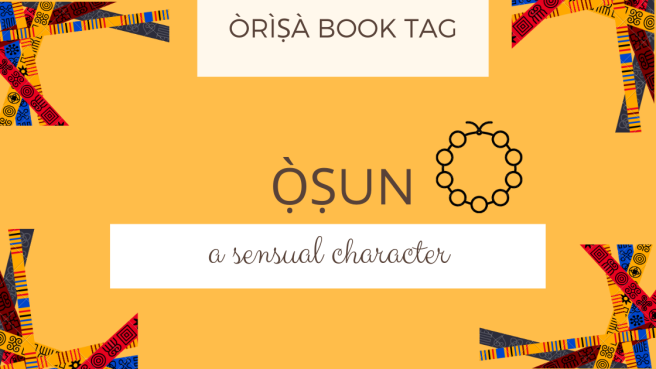 Ọ̀ṣun is the Yoruba divinity of love, beauty, intimacy, diplomacy and fertility. She is also one of the river deities, under Yemọja.  Ọ̀ṣun is second wife of Ṣàngó, the Òrìṣà of thunder, lightning and virility. She and Ọya are said to strong rivals. She is associated with grace, beauty and sensuality.

Ọ̀ṣun is the patron of River Osun and birth mother of Ibejí.

Joshua ‘Jay’ Hoffman from The Black Veins. I took a while to think of character, but then I remembered my son, Jay and it just felt right. If you haven’t read TBV yet, Jay has this magneticism and sensuality to him, as the Guardian of Body, and he’s also oppresively pretty.

Èṣù is Òrìṣà of chance, accident and unpredictability. He/She is the divine messanger and Ọlọrun’s linguist and therefore the messenger. Èṣù is said to be lurk at gateways, highways and crossroads where they brings chance and accidents into the life of humans. Èṣù is one the genderqueer divinities (please don’t argue this with me, i won’t be nice about it as i’ll take it as queerphobic and if you think its incorrect please go read up sexuality and gender orientation in precolonial yorubaland)

Ignifex from Cruel Beauty. Igni-fucking-fex (excuse my language). You know those characters that when you see a tag you’re like ‘you, yes you’, that’s what I thought after creating this tag, I just knew it was Ignifex. Who else is better than my sweet, evil Gentle Lord, who makes roundabout bargain for this tag? The one who’ll make you bargain and laugh at how naive you’ve been. My beautiful one eyed baby who’d introduce you to accident and misfortune. *sobs* I love my child. So yes, the love of my life, Ignifex.

Locke from Folk Of The Air Series. I might hate this fucker, but I agree he’s the man for the job. Locke is just…I have nothing good to say. He’s a trickster, one of the worst kinds, so he’s good for this tag.

Ọ̀rúnḿìlà is the Yoruba deity of wisdom, knowledge, divination and fate. Ọ̀rúnḿìlà is the grand priest and custodian of the Ifá oracle. In the tale of origin, Ọ̀rúnḿìlà was one of the Òrìṣà to be sent down to make the Earth habitable for man. Ọ̀rúnḿìlà is known as the second in command of Olodùmarè (Igbakeji Olodumare) and a witness to fate.

Yetu from The Deep. Perhaps, if I thought deeper (ok, I see that pun there), but when Yetu came to mind, I thought she was the perfect character. Yetu is basically the custodian of knowledge for her people, the wajinru, and every Rememberance see passes that knowledge about their history to them as the wajinru are gifted to forget. Yetu, like, Ọ̀rúnḿìlà can be seen as a priest of sorts, as her people worship her in a way. 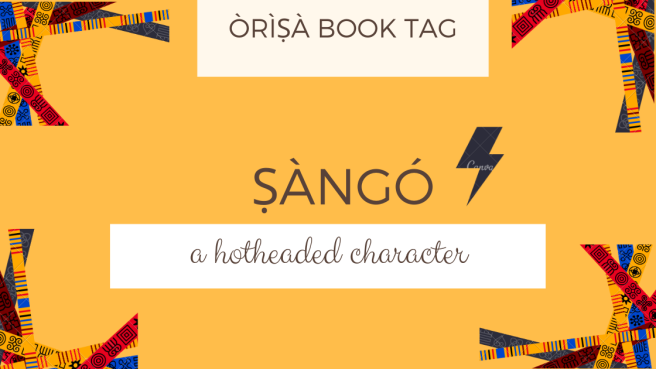 Ṣàngó, is the Yoruba deity of thunder, lightning, justice, dance and virility. Ṣàngó was the third Alaafin of Oyo, and is said to be deifitied posthumously. Ṣàngó had three wives, Ọbá, Ọ̀ṣun and Ọya. A little at odds with his title, Ṣàngó was a little bit hot tempered and his reign was full of wars. Ṣàngó is one the most popular Òrìṣà and his dance is the Bata dance.

Jude Duarte from Folk of The Air Series. Now, Jude is more angry than hot tempered. She perpetually angry because anger is better than fear, which is what she is truly is.

Ọya is the Yoruba divinity of storms, cemeteries, change and rebirth. Ọya is third wife of Ṣàngó and was the one stood with him till the very end. Ọya is also a powerful Òrìṣà is often described as the Tempest. Ọya and her immediate senior wife, were bitter rivals, a rivalry that wasn’t only borne for the love of their husband, but also because of the right to Ibejí.

Ọya is the patron of River Niger and the adopted mother of Ibejí.

I know 99 loyal characters, but can’t think of the perfect character of this, phew.

Dean from We Hunt The Flame. I thought really hard about this one, and I think he fits. Dean, might have been in love with Zafira, but you can’t dismiss his loyalty. He was also so sweet and kind, I can’t *sobs*.

Also, Laia from An Ember In The Ashes. I know I’ve talked about this in another tag, but Laia’s loyalty and what she goes through for her only remaining family is one of the reasons I love her.

I’m tagging Saoudia , Nelo, Tanya, Em, Fadwa, Olivia , Taiwo and anyone who wants to play. Booktubers and bookstagrammers are welcome to participate in the tag; just tag me in your videos or post or even on twitter if you participate.

Thank you for being here till the end of the month. Again, Happy Black History Month!

5 thoughts on “The Black Experience: The Òrìṣà Inspired Book Tag”