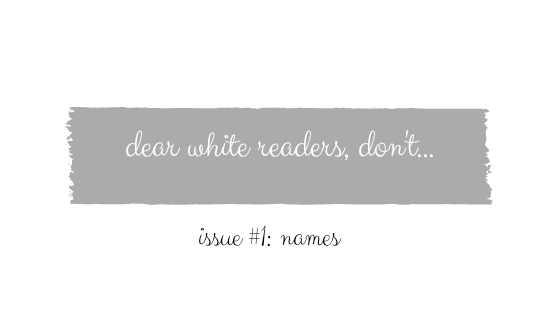 Hey, everyone! I’m back again with a new topic/rant, and I think from the name is pretty self explanatory.

I love bookish communities, I really do. Goodreads, bookish twitter, bookstagram, book blog communities, bookstagram, they’re really helpful both to authors and readers alike, but the most insensitive, annoying and toxic things happen on there too. For example, and particularly related to this rant, white readers and reviewers picking on books written by POC for the most illogical and insensible reasons. This seems to happen more on Goodreads, but other bookish communities aren’t left out of this too.

Today, my rant is on POC names and the rather annoying way some white readers react to seeing them in books and Oh God, please don’t!

A while back, I saw a review on a book by an author of colour and in the comments someone made a really insensitive and annoying comment about the character’s, who was also a person of colour, name. That was not the first time I was seeing something like that and I’m pretty sure it isn’t the only comment or review with such insensitive and bigoted view. Also, not too long ago again, I read a blog post with an element of this, and being on bookish twitter this isn’t so new to me, but that didn’t make it any less annoying or appalling.

Firstly, I honestly don’t understand if some white readers do not know that other cultures exist, and that POC have different naming patterns and oh…languages in which they are named too. I mean it must be shocking right?! The fact we have a totally different way of life and structure for naming, because what the hell does “x character has a weird name” or “Wtf, I hate x book, I couldn’t pronounce x character’s name.” or “is this even a real name?” mean? I don’t know is Longbottom or Hitchcock a real name?

Was the last line annoying? It was right? I apologise if those examples were anyone’s names, I was trying to make a point. Its super annoying for POC to see you invalidate or declare our names insensible or freakish, and it hurts too. That is exactly what you do when you make post like that you make us feel other, because a lot of people share names with characters.

Can you imagine how you’d feel if some stranger, both to you and your culture, said you name was odd or outright made fun of it? I’d feel horrible if someone did that to me, and seeing that I have experience with people making a mockery of my name, I felt like absolute trash.

For most people of colour, and I can only speak for my culture and the ones I know of, our names are so important to us. For some, they’re like stories.

The same way names like Jane, Elle, Sam, Stone and Brown are valid is the same way POC names Tachi, Somto, Simple, Anu, Ododo, Khalil and Huang are. The fact that they don’t follow the trends or rules you know, doesn’t mean they are not valid or that you have the right to mock them or be rude to authors of colour for wanting to use something from their culture.

I apologise again for the statement I made before, I just wanted a practical example and meant no harm. If those are your names, I’m sure they have interesting origins or stories begin them and I mean no insult.

If you’re one of those people, who make unkind (I don’t want to use the word nasty, although it perfectly describes some readers) comments about POC names, I hope you know not to do so again. If you’re confused about names, as it could happen to anyone when reading books with an element of another culture, Google is there and pretty helpful. I’ve learned so amazing things about other cultures too from my efforts and not making a mockery of another people’s way of life.

I hope I was able get my message across *awkward laugh*. Have an amazing day! 💗