Yejide and Akin have been married since they met and fell in love at university. Though many expected Akin to take several wives, he and Yejide have always agreed: polygamy is not for them. But four years into their marriage–after consulting fertility doctors and healers, trying strange teas and unlikely cures–Yejide is still not pregnant. She assumes she still has time–until her family arrives on her doorstep with a young woman they introduce as Akin’s second wife. Furious, shocked, and livid with jealousy, Yejide knows the only way to save her marriage is to get pregnant, which, finally, she does–but at a cost far greater than she could have dared to imagine. An electrifying novel of enormous emotional power, Stay With Me asks how much we can sacrifice for the sake of family.

Stay With Me is a beautiful, yet sobering books that makes you think long after you’re done with the last page.

Set in Nigeria and told between two alternating times and from two different points of view, Stay With Me follows the story of Yejide and Akin, a married couple, as they struggle with family obligations and the cost they bear.

The story is centred around Yejide’s and Akin’s effort to have a child and the consequences of their desperate decisions.

I honestly love Stay With Me, because of the way it shines light on some deep cultural issue —particularly childbearing, that plagues virtually all Nigerian cultures.

In Nigerian cultures, childbearing is thought to be a woman’s duty and a woman who can’t produce children, isn’t recognised as a woman. And on the occasion a woman does not have children, it is immediately her fault, no one considers the possibility of it being a problem of her husband’s; this comes to play in Stay With Me.

After four years of being a good wife and daughter-in-law, Yejide isn’t seen to have any worth, because she hasn’t had a child yet, but still you have to wonder, what of Akin? Where is the pressure on Akin?

Women manufacture children and if you can’t you are just a man. Nobody should call you a woman

As much as I love the fact that this issue is represented in a book, its still tragic to see.

The book also explores the culture of polygamy in Nigerian cultures and when on the occasion the wife does not give birth, a man is forced (most times, its willfully) to take a new wife, to appease his family’s needs; and how the wife(s) cope with this arrangement.

A man is not something you can hoard to yourself; he can have many wives, but a child can have only one real mother. One.

Along side these cultural issues, it also shows the consequences of actions and inactions on parts of couples and its effects of relationships. How within a matter of seconds a once perfect love can me permanently broken.

Stay With Me takes many parts of culture and weaves with the plot while still maintaining its originality.

I can honestly say the characters in Stay With Me were so well written; honest and flawed, they felt real, not downplayed versions what they would be reality. Their emotions, their struggles, their hopes and joys were all so human — especially with Yejide and Akin whom the story revolved around — I could feel everything they were feeling.

They were basic, understandable characters, as human as they could possibly be.

In respect to characters, I loved Stay With Me.

Overall, I’d say I loved Stay With Me. The pacing was just right and I love Ayobami Adebayo’s writing style, its simplistic and beautiful. I also love the way she managed to include culture and the political climate of that time without taking attention away from the plot, that for me was wonderful, because I can’t recall having seen the tragedies and frustrations of that time so beautifully incorporated in a book.

The only problem I did have with this book, was the lack of differentiation with the words written in Yoruba (in Yoruba there are letters that are different, but look similar and are only differentiated by accent marks; example – e & ẹ), so it was a bit difficult for me to understand the words, without straining and trying to pronounce a few times, and for this reason I docked half a star from the rating.

For everything else, it was an awesome book, could have been an easy five stars, but I wasn’t very happy about the lack of tone marks.

A heart wenching story of love, family obligations and mother, Stay With Me is a book I’ll recommend. 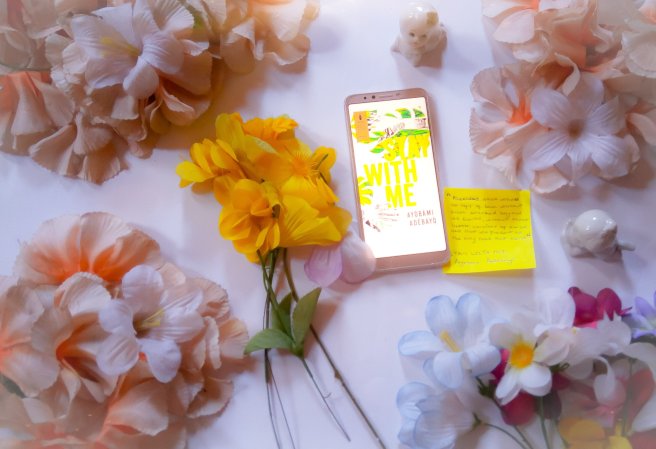 Have you read Stay With Me? What are your thoughts?

You can find me on Twitter and on Instagram, if you enjoy my work support me by buying me a coffee.